Imagine that you are working on an important document. Once it looks good you send a copy to a colleague, who then sends it back with some suggestions for improvements. You keep both files as reference and unify them in a “final” file, only for you to realize that your “final” file has one wrong figure and you need to fix that. After some more back-and-forth, and before you realize it, your Documents directory is full of slightly-different versions of the same file and you have a hard time realizing which one is the “good” one. 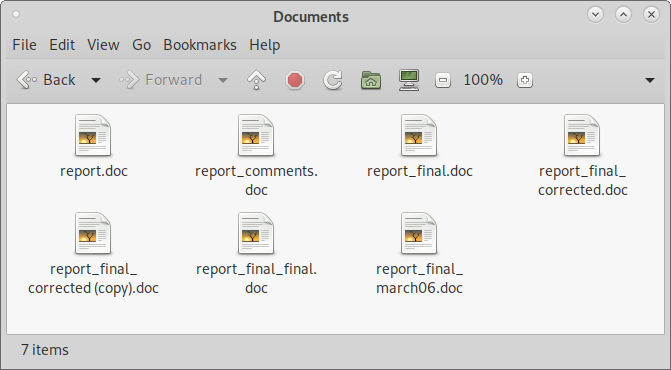 Git is designed to solve this problem. Of all the things that you can do with Git, we'll focus on three specific ones:

This tutorial is designed to teach you how to use Git to achieve these three objectives.

But first, some technical details

There are two topics that this tutorial doesn't cover: how to install Git, and how to deal with whatever the authentication method of the month in GitHub/GitLab is. For instructions on installing Git there is no better starting point than the official Git website. As for the authentication, this tutorial will simply assume that you use a username and password. For a more detailed guide, I'm afraid you'll have to check what your repository provider has to say.

While there are several good graphical interfaces for Git, this tutorial will only use the command line. Graphical tools are good once you know what you want to do, but they abstract many important concepts that we first need to learn. Once you are done with the tutorial, you could consider using something like TortoiseGit to have a graphical interface .

And finally, there is a lot of complexity to Git, and explaining all of it at once can be overwhelming. For this reason this tutorial will often ask you to ignore certain directories and/or command outputs. But don't worry: by the end of the tutorial all of it will have been explained.

In this tutorial we will follow Sarah. She works as a chef for a fancy restaurant, and has finally decided to digitalize her recipe book. She would also like to collaborate with other chefs making new recipes, and is particularly interested in keeping multiple versions of the same dishes (such as her vegan paella and her salt-free chicken soup recipes) up-to-date.

The first core concept we’ll learn is a repository, or repo for short. For our purposes, a repository is a special directory that keeps a detailed log of everything that happens to each file in it.

Creating a new repository is easy. All Sarah needs to do is to go into her target directory and type:

This empty directory should now contain a (hidden) directory called .git where Git stores all of its information. Users rarely need to modify files in this directory by hand, and therefore this tutorial will pretend that it doesn't exist.

Now that Sarah has a repository, we can ask Git if there’s anything we should worry about right now with the git status command. This command gives us an overview of what’s going on at any time, and will be very useful throughout this tutorial.

Unsurprisingly, since we haven’t done anything yet there’s not much for Git to do. Nonetheless, Git lets us know that…

When we commit (verb) one or more files we are explicitly keeping track of their status at this point in time. We call this snapshot in time a commit (substantive), and there’s no better way to understand them than to see them in action.

If we use git status now, Git will let us know that something has changed:

It may seem as if nothing happened, but the git status command tells another story:

With one single git add, we have actually performed two tasks at once:

Note: this behavior in which two commands are presented as a single one is common in Git. We will often describe the step-by-step behavior to make sure that no “magic” takes place, but in general you don’t need to think about the individual steps.

Since we just have this one file, we will now create a record of the state of all files added to the "staging area". In Git terms, we say that we will commit our changes to the repo:

Once we type this command, a text editor opens and asks us to type a description of the changes we are saving. I have added Sarah's description at the bottom to make it easier for us to read, but most programmers write it at the top. Feel free to write your description anywhere you want.

A lot has been written about how to write commit messages. This tutorial uses short messages of no more than one sentence for educational purposes, but I encourage you to dedicate a bit more time. Typically, a one-sentence title followed by an optional, longer description is ideal. I also prefer to start my commits with a verb in present tense.

When writing commit messages remember: they are not intended for you right now, but rather to future you. 5 months from now, which message will be more useful? "Fixes error" or "Corrects under-performing revenue numbers in our February 2019 report"?

Once we write this description, Git lets us know that all went well.

Ignoring the numbers between brackets for the moment, Git is showing us which changes are part of this commit. In this case we added a single file with 7 lines of text in it, but it could have been multiple files. If we now type git status again we’ll notice that Git has gotten less verbose:

This is to be expected: all of our changes have been committed to the repository, and therefore there’s not much left to do.

Before we move forward, let’s make a quick recap of all the states in which a file can be - in your daily work you typically only need to think about "tracked" and "modified", but it's good to know the main ones:

Let’s see what happens when we modify out recipe (modifications in yellow):

Git is now telling us a lot of information, so let’s go step-by-step:

Let’s go ahead and commit the current version of the file. We can use the -m flag to give the commit description right now without going through the text editor:

Now that you know how to commit files, it is time to talk about what a commit actually is. The best way to think about them is to picture a commit as a list of all the differences between the previous version and the new one.

Here’s an example: let’s add some salt to our recipe:

The command git diff can tell us what has changed between the last commit and the current version of our file(s):

This format is rather cryptic, but it’s not difficult to understand. What Git is telling us here is that the file recipe.txt was modified, with some lines going away (those marked with -) and some new lines coming in (those marked with +). Note that when you edit a line Git takes that as if you had erased it entirely and replaced it with a new one. A commit, then, can be understood as this specific set of changes to this specific set of files in our repo.

Because we are thinking of a commit as a set of changes, a commit only makes sense if we also take into consideration the previous version of the file. And because that version depends on a previous one, we can visualize our commits as a chain going back to our very first file. We can see this chain with the git log command:

This command is showing us a lot of information about a commit:

If we want to see an old version of our file, we can use git show and a specific commit hash (or, in this case, the first seven characters of the hash) to go back in time:

These commit hashes are how Git identifies every individual commit. We have seen them before: the short version of the hash is shown in brackets after every commit. We’ll be using these hashes in our more advanced lessons, but otherwise they are yet another detail that we can safely ignore for now.

One tip worth keeping in mind: you can add an easy-to-read tag to a commit and use it instead of its hash:

If you want to see all existing tags, the command git tag will list them all. These tags will also show up in the output of git log.

git show is convenient if we want to see an older version of a single file, but what if we want to see the state of the entire project instead? Here I have good and bad news. The good news are that there is a single command that does exactly that. But you'll have to wait until Part 5, "Revisiting the past", or I risk losing you with too many concepts at once.

git init <directory>
Creates an empty Git repository in the given directory.
git status
Shows information about what has changed in your repository since your last commit.
git add
Tells git to start keeping track of a previously-unknown file.
git commit
Saves the current state of the files in your repository. This snapshot in time receives an identifier called a hash.
git tag
Adds a human-readable label to a specific commit so we don't need to remember it's hash.
git diff
Shows what has changed between two commits. If we don't give it any arguments, it shows what has changed between the last commit and now.
git show
Shows the content of a specific file at a specific point in time.

This concludes our first part. With the commands we’ve seen until now you can keep track of file changes, see their older versions, and add little tags to those versions you may want to revisit in the future.

In Part 2 we’ll talk about how to collaborate with other users, how to work in parallel, and how to solve collaboration issues.